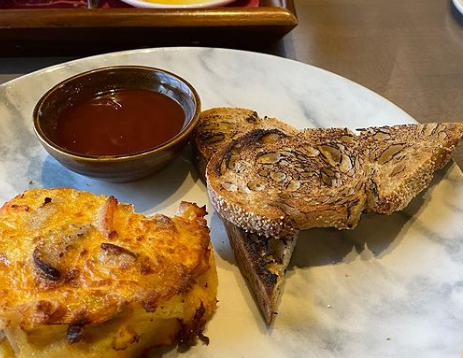 Although September was yet another month which didn’t quite turn out as planned, we’ve been continuing the theme of getting out and meeting our friends and partners from across Scotland.

As I alluded to in the last blog post, September started for me in St Andrews. Waking up in the wonderful Rufflets Hotel (a favourite of Jack Nicklaus’ when he was in St Andrews) to one of their epic breakfast frittatas.

Perhaps even better, I also awoke with the prospect of an early tee time on The Old Course – courtesy of the Old Course ballot – with one of my best golfing friends; you know the type – someone who can stifle a laugh when you fat one into a bunker or knows to avoid eye contact when you’ve sh*nked one into heavy rough!

There really is nothing quite like a round of golf on The Old Course and, I think, this was the earliest tee time I’ve ever had here (0730!).  Playing that early, in flat calm and beautiful conditions, was almost like a dream.  The stillness on the first tee and the rising sun on your back as you walked down the first fairway were just magical.

It just reinforced to me that no matter how many times you play this wonderful golf course it has the ability to surprise and delight you time and time again.

I didn’t have to wait long to enjoy another Open venue though as another tour operator, Gary Wilkinson, and I stepped onto the first tee the next day at Musselburgh Old Links. 6 time host to The Open Championship in the 19th century, this golf course (a nine holer set within the confines of a racecourse!) is another experience like no other!

When the starter points out that the racecourse is in play but that you get a free drop from a hoof print (!) you know you’re about to experience something pretty special.

To Gary’s ‘surprise’ I had one of the best rounds of golf I’ve played in years. It’s not every day you have a net 58! I may have lost Gary as a playing partner but it was great to have gained a bit more confidence in my game.

My next rounds of golf came after a short skip over to Northern Ireland where we played Ballycastle Golf Club and Royal Portrush.

Ballycastle sits on the North Antrim coast with views (on a clear day) back over to Scotland and the Mull of Kintyre.  It was great fun – only increased by having an Ireland vs Scotland match; we lost at the last, I’m afraid to say…

The next day it was on to Portrush to play The Dunluce Course; host to The 148th Open Championship in 2019.  The club were running a series of ‘148 Open’ events on Tuesdays and we played in pairs in a betterball format; finishing 8th out of 102 teams.

The course and the view of, and from, the course are breathtaking. My pictures (and my golf game!) did not do it justice.  Royal Portrush is a warm and friendly club where everything from the lorne sausage roll to the quality of the driving range are first class.

Next up on the golf front was a trip to Kingsbarns Golf Links.  Simply put, Kingsbarns is one of the very best golfing experiences in the world.  Everything they do is with the golfer right at the front of their mind.

When you’re then blessed with epic weather and the company of 2 great friends the magic is complete.  As my game went a little sideways at Portrush it was great to get back on the horse and play so well at such a wonderful golf course.

I took some videos of my playing partners tee shots on the terrific short 15th hole but have been explicitly banned from sharing them!

My thanks to the whole team at Kingsbarns for another amazing day.

Moving into the last full week in September now and the weather continued to do us a terrific turn.  I travelled to Machrihanish with my father-in-law to tick off courses which have been on his bucket list for a long time; Machrihanish Dunes, Dunaverty and Machrihanish.

Arriving late in the evening (in an electric car running low on juice!) to a wonderful welcome in the pub at The Ugadale Hotel was just what I needed too.  A few pints, a bite to eat and an amazing rooms with a extremely comfortable bed was the perfect way to set up for the 36 holes to come the following day.

The respect shown for the natural landscape at Machrihanish Dunes is terrific to see. The maintenance of the sand dunes and creating a golf course in such a natural setting is a great credit to David McLay Kidd and his team.

In the afternoon it was the turn of Dunaverty.  I had heard so much about the place (not least from Eric Anders Lang’s recent video) and it did not disappoint!

This is a natural, spellbinding, spectacular golf course in an amazing setting with quirky, tricky holes.  My father-in-law and I were both captivated by it.  I had travelled to Machrihanish before and played both the Dunes and Machrihanish itself but had skipped Dunaverty.  That was a mistake.  If you’re out here you need to play Dunaverty.

The next day – after a few more of the aforementioned pints at The Ugadale Hotel! – it was the short walk across the road to the first tee at Machrihanish Golf Club. And what a first tee!  Proclaimed as ‘the best opening hole in the world’ it’s hard to argue with a carry over the Irish Sea from the tee.

To say that my father-in-law was excited to play the course (which had been on his bucket list for over 50 years!) would be a massive understatement.  Even more wonderful was that the course did not disappoint in the slightest.

He played sparkling golf (which always helps!) and the course was in exceptional condition. I’m not sure how many pictures across to Jura and Islay he took but there can’t have been much storage capacity left on his phone when we stepped off the 18th green!

Heading back to Edinburgh from Machrihanish on the 23rd it was a quick turnaround as I was booked onto a flight from Glasgow to Benbecula at 0715 on the morning of the 24th.

Why? I hear you ask… well, to make the short drive south from Benbecula to play Askernish.

Although I may look old enough for it to be true Askernish hasn’t been on my bucket list for as long as 50 years but it has been for a good while.

Everything I had heard and read about the ‘lost Old Tom Morris’ course could not have prepared me for the experience itself.

This is raw, beautiful Scottish links golf at its very best.  If you’re looking for something manicured and sculpted then Askernish is not for you but if you want to play a golf course which uses the contours of the land, the natural beauty of a setting and (in winter!) the local sheep and cattle to keep the grass short then this is ‘it’.

Bring a few spare balls and be prepared for a few ‘bad’ bounces but come and play Askernish.  Please.  You won’t regret it.

The journey (either by air or sea) is all part of the experience so drink it all it.  Words and pictures do not do it justice.  It needs to be experienced.

The last week of the month saw me squeeze in 2 more rounds of golf; at Harburn Golf Club and Dumbarnie Links.

Despite being very close to home, this was my first time playing Harburn and it was a delight.  There are some great holes on the back nine, chief among them the 15th; simply entitled ‘?’.  It’s just over 100 yards and played over a ravine and encroaching trees to a small, undulating green.  I was delighted to hit the green, have my two putts and get out with a fine par!

The next day it was back to Dumbarnie.  This was now my 4th round at the course which officially opened at the end of May 2020 and I have to say it just gets better with every visit.

David Scott and his team have put so much work into the course, the welcome and their social media presence to make the very most out of their first season.

As soon as things open up, this will definitely be a ‘must play’ for international golfers visiting Fife. And what I noticed this time, more than on previous visits, is the way many of the holes / green complexes have been designed with a gallery in mind.  The noises about Dumbarnie hosting a professional event are, rightly, growing and the space they have would certainly lend itself to a large spectator event (remember those?!).

It was a great way to bring my September to a close.

I started October by ticking the last box in my Scottish venues to have hosted The Open Championship list but that’s for next time.